At the end of Joël Rochat’s term, the director position became vacant. Who would INSA Lyon’s Board of Directors choose to guide the vessel? Applications piled up and paths became mapped out, then right at the last minute, Alain Storck put himself forward. This director of an engineering school in Nancy had been informed about the vacant post by one of his acquaintances, Jean-François Sacadura, who was director of CETHIL. I wasn’t at all planning on leaving Nancy at the time. Everyone thought I was running for the presidency of the INPL (National Polytechnic Institute of Lorraine), but fate decided otherwise announces Alain Storck.

Viewed as an outsider, Alain Storck wasn’t the ideal candidate in theory, and he lacked support within INSA. He was on the verge of giving up when the Chairman of the Board of Directors, Paul Rivier, caught him up. He suggested that we meet at the headquarters of the Rhône-Alpes Region in Charbonnières. I put forward my project to him and he encouraged me to go ahead with my application specifies Alain Storck. In the end, he was elected by the Board and assumed his duties on May 1, 2001.

On the day of the election, Paul Rivier said to him,“Until now, you’ve been driving a speedboat, now you’re going to be steering an ocean liner”

I remember the day when I arrived on the campus. Ironically, it was May 1, Labor Day! The weather was awful! I had left Nancy and all my ties for the first time in my life. I was put up in a small house not far from the military cemetery, I was down in the dumps , recalls Alain Storck. His first impressions soon faded into oblivion and the new director entered the scene with a big ambition: to grant INSA the visibility it deserves, both at national and international level. One meeting was held after the other, life at INSA developed and Alain Storck won his first victory.

It was a major operation, it was hard to undertake. We wanted to incorporate the Graduate School of Plastic Processing (ESP), based in Oyonnax, into INSA. But there are always obstacles when it comes to absorbing a small school. The residents of Oyonnax and the people from the local Chamber of Commerce and Industry went as far as to ask if we were only interested in ESP’s fine premises as opposed to incorporating the school! But it was a success in the end , remembers Alain Storck.

On December 23, 2004, ESP was merged into INSA. In terms of training, this led to the creation of the Mechanical Engineering Plastics Processes (GMPP) section within the Mechanical Engineering Design (GMC) department.In terms of research, this merger also brought about the formation of a multidisciplinary working group: the Multidisciplinary Research Group in Plastics Processes (GRPP). It grouped together four laboratories (CETHIL, LAMCOS, IMP, Matéis) to which teacher-researchers and technical/admin staff from ESP were assigned, adds Jean-Marie Reynouard.

In 2001, Alain Storck appointed the Director of Doctoral Studies, Jean-Marie Reynouard, as Research Director. For ten years, the duo pursued a research reorganization policy to gain scientific recognition.We were convinced that our doctoral students were the linchpin of research, so first of all we ensured that the doctoral studies department took on another dimension by becoming a deputy research department. Jean-Michel Jolion, who is now Advisor to the Cabinet of Minister Najat Vallaud-Belkacem, was the first director of the department explains Jean-Marie Reynouard. Then we set out to reorganize research at INSA Lyon. At the time, certain laboratories had no recognition; very few of them were associated with the National Center for Scientific Research (CNRS). We took them by sector and reorganized them: in mechanics, for example, we merged four labs into one. We were fortunate to entrust this task to Alain Combescure, who left ENS Cachan to join us, boasting 20 years of experience at CEA Saclay. Today, this lab, LaMCoS, is one of the three largest mechanics laboratories in France sums up Jean-Marie Reynouard.

The IT sector was also reorganized. Although the graduates from the IT department were being  « snapped up » on the labor market, the INSA laboratories associated with this specialist subject were experiencing hard times.There were four laboratories, including two that were straddling Lyon 1 University and INSA adds Jean-Marie Reynouard. We ended up merging them to create the LIRIS laboratory, which was originally directed by a professor at Lyon 1, then by Attila Baskurt who was the then director of the Telecommunications department. He turned it into a great laboratory.

Other laboratories also emerged as a result of small mergers, such as MATEIS, managed by Jean-Yves Cavaillé. Moreover, three associated international laboratories also came into being: ElyTLab in Tohoku, Japan, LN2 in Sherbrooke, Canada and METISLAB with the Harbin Institute of Technology in China.We reduced the number of labs from 33 to 20, with CNRS co-supervision for the vast majority of them. This earned us a huge amount of scientific recognition, not to mention national and international visibility points out Jean-Marie Reynouard.

Alain Storck was delighted to see the rise in number of doctoral students. There were 421 when I arrived and 650 when I left. We unlocked the mysteries of research among engineering students by carrying out discovery operations during their course adds Alain Storck.

Attracting research talent and encouraging diversity were two aspects which marked this first decade of the 21st century. In 2005, in an extremely challenging national context, the diversity problem moved up a gear. There were fires in the suburbs and the government lost a lot of ground. The ‘Conférence des Grandes Ecoles’ association wanted the ‘grandes écoles’ to uphold their role of ensuring social opening.

The people from the suburbs saw the engineering schools as places where only the elite could study, so we had to encourage social diversity against the backdrop of a worsening crisis”, recalls who graduated from INSA Lyon’s Physical Engineering department in 1976. I was director of the first cycle at INSA Lyon when Alain Storck came to ask me to involve the first cycle in this social opening approach. I had already hired a psychologist, Karine Rouyre, in 2001 to support our first-year students, and together with her, I introduced a number of measures, starting with a disability unit prescribed by a Ministerial text specifies Yves.

To promote social diversity on the Villeurbanne campus, Yves Jayet then approached high schools in the suburbs and, together with Guy Athanaze, a mathematics teacher at INSA, created the ‘Cordées de la Réussite’, a scheme financed by the Ministry of Urban Affairs to encourage higher education establishments to ‘reel in’ high school pupils.

Then in 2009, Alain Storck suggested that I create a structure devoted to all forms of diversity: social opening, opening up to an international dimension, opening up to disabilities, and academic opening (by opening up the entrance exam to pupils who didn’t major in sciences at high school). Personally, I was keen to participate in the outward displays of this policy, in the broadest sense”, continues Yves Jayet. In 2009, the Diversity and Success Centre (CDR) was created and helped to restore diversity to its former status as a pillar of the INSA model.Diversity is a source of enrichment, and many initiatives were undertaken with this in mind at INSA. Yves Jayet and I wanted to introduce a global policy to better coordinate and promote this diversity. In the end, we created the Diversity and Success Centre, and Yves was its first director remarks Alain Storck.

Another major creation came into being on the Villeurbanne campus towards the end of this first decade: the INSA Lyon Foundation – a highly coveted and appropriate tool. Creating a foundation was very much in vogue at the time, many people aspired towards this recalls Alain Storck. Firstly for financial reasons, to increase and diversify an establishment’s resources. Secondly, to structure global business partnerships. A firm that enters into a foundation with a million euros doesn’t just do so for business purposes, it also shares a strategic vision with the school stresses Alain Storck, who opted for a partnership foundation in order to share power with the business sponsors. This vision was shared by Alexis Méténier, the first director of the INSA Lyon Foundation, which was officially established in 2010.

Continuing with its pursuit, INSA Lyon set out to enhance its network. As at 2010, four other INSA schools existed in France: Toulouse (created in 1961), Rennes (1966), Rouen (1985) and Strasbourg (2004). INSA Lyon provided the impetus to create an INSA charter and set up an INSA partner scheme to allow other institutions interested in the model to join the network. This network became the INSA Group, guaranteeing a common identity, a unique training model and shared values, while accepting the differences of each entity.

Whereas the campus’ reputation extended beyond the borders and boosted INSA’s rankings, the establishment’s finances came very close to criminal action. An architectural project ended up pushing the accounts into the red: the Marie Curie library, inaugurated on April 8, 2010, called for an extra financial investment from INSA in the order of 6 million euros. The establishment’s working capital was far from the 60 days required to keep the ship afloat. Under scrutiny by the education authority, what did the future hold for France’s no. 1 post-baccalaureate engineering school? 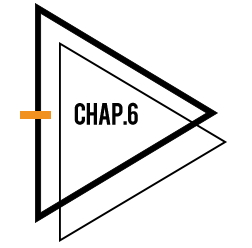 Official mascot of the students-engineers of INSA Lyon, the rhino throne on the grass of the Humanities since 2003. 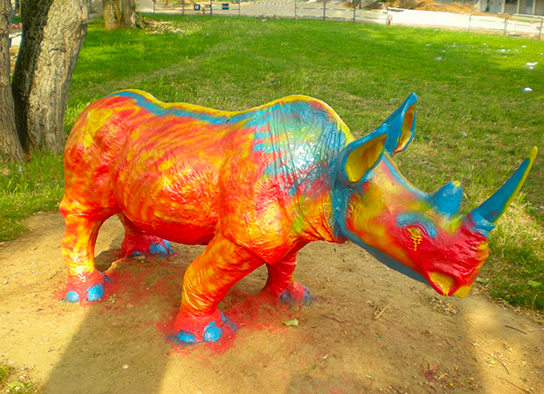 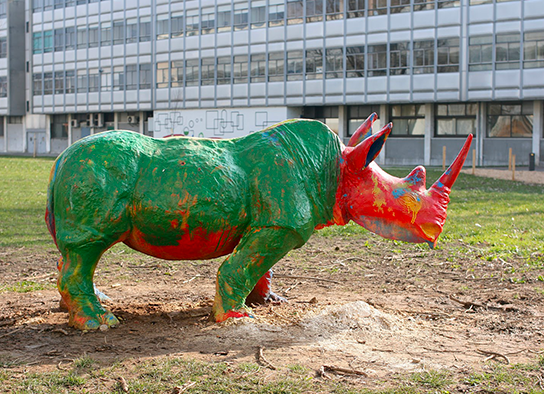 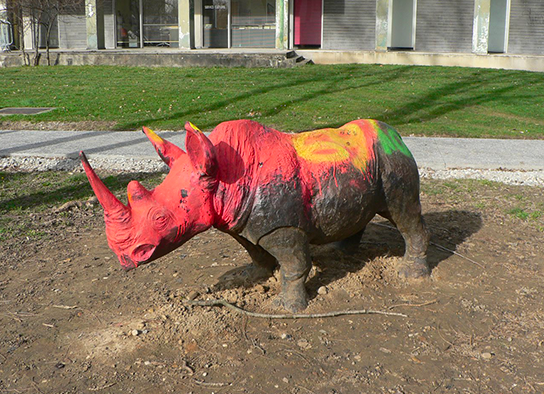 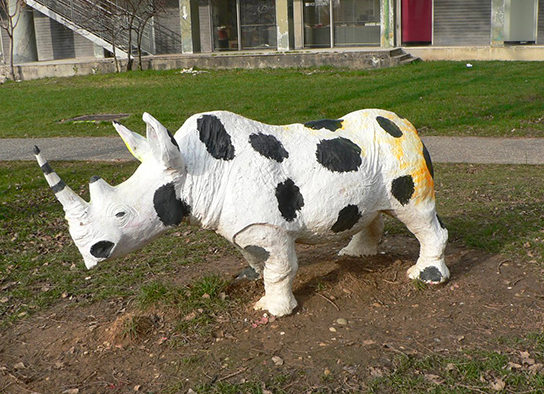 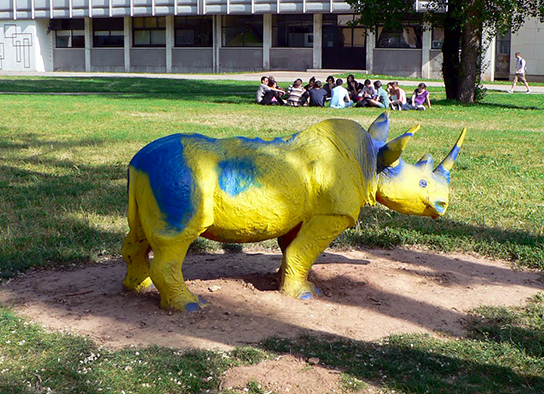 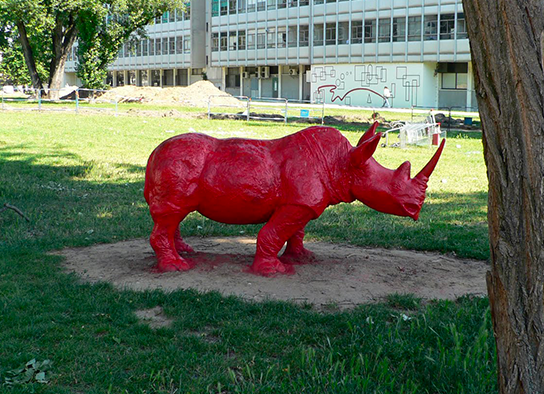 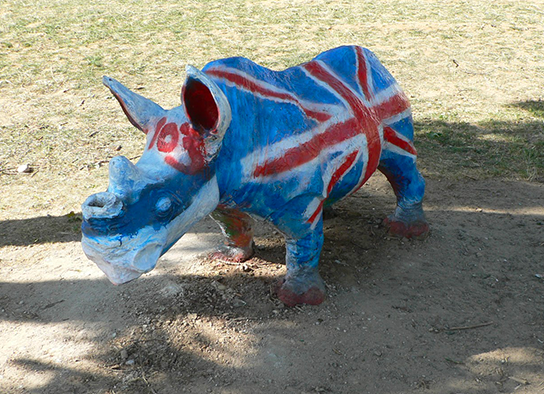 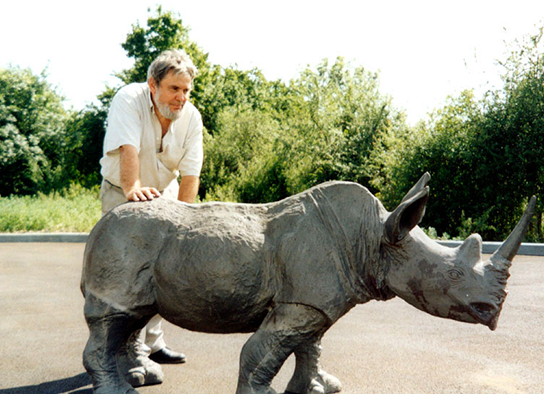 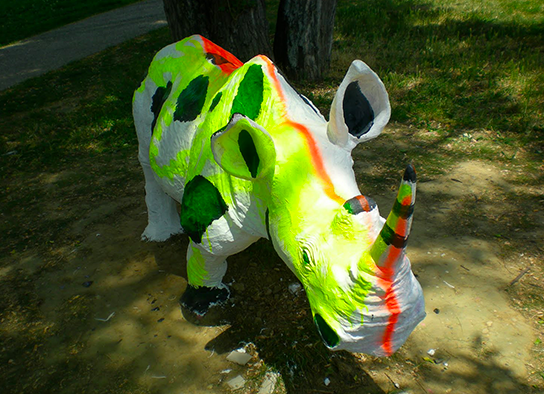 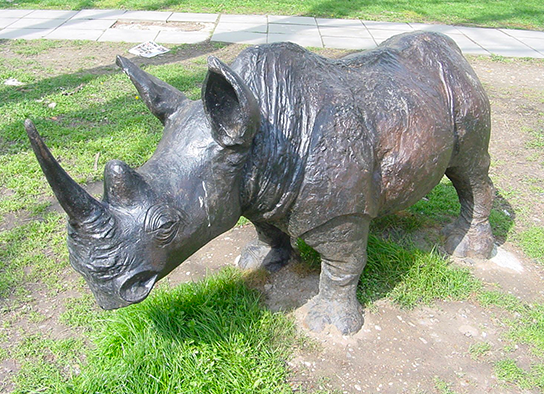 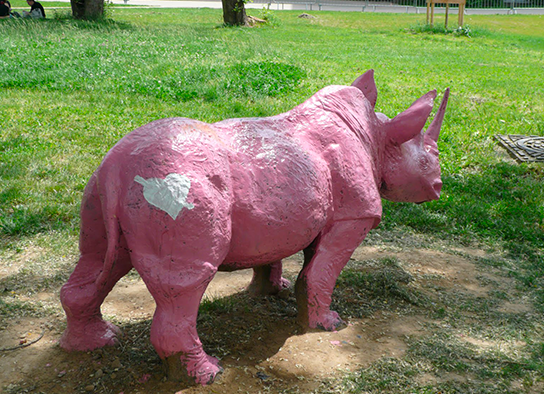 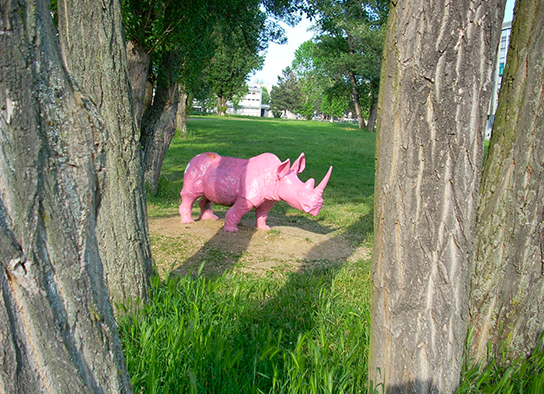 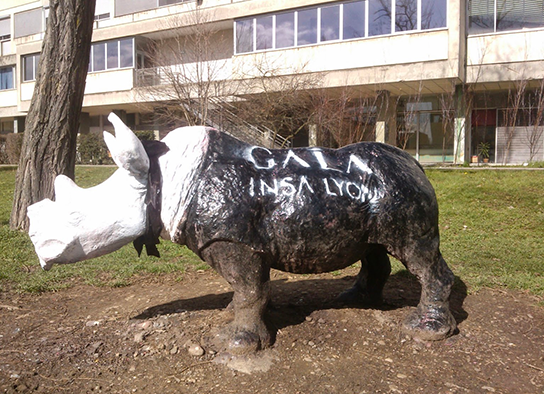 « After creating POLDEN we soon realized that we had to expand the field of competence, so we suggested creating the SIG EEDEMS with the lab (which since became LGCIE, ENTPE then CSTB, in 2000). To ensure that the overall system could work, we knocked on the door of the Rhône-Alpes Region to obtain resources and create a platform. A few years later (in 2008), thanks to our experience with this tool, we were able to respond – on behalf of INSA Lyon, the SIG ENVIRHONALP and EEDEMS – to a national call for projects launched by the Ministry of Industry and a regional call for projects to create an even more ambitious technology platform at national and international level. This formed the basis of the PROVADEMSE platform. We secured the funding and I became manager of PROVADEMSE, which was launched in 2010 with the aim of developing more environmentally friendly waste recovery and treatment processes.. »
Jacques Méhu

2009: Incorporation of CAST S.A. into INSAVALOR

INSAVALOR, INSA Lyon’s technologies transfer and valorization subsidiary, incorporated CAST S.A., thereby expanding its field of activity to continuing education in a manner that was consistent with research valorization. Michel Descombes, is still in charge of INSAVALOR today. He initially became managing director of CAST S.A. back in 1999, taking over from Jean-Paul Paris, Raymond Terracher and Christian Pillot.

2010: Creation of the INSA Lyon Foundation